What would you attempt to do if a successful outcome was inevitable, knowing that you could not fail?

Think about all the possibilities… What do you want to bring into your life? How would you like to be?

As long as you’re in the resourceful state associated with the achievement of your dream, you’ll find ways of manifesting it. As soon as that internal dialog begins which tries to talk you out of going for it and keeps reminding you of all the difficulties and dangers involved, then you’ve stumbled upon a mental obstacle. This is the kind of thing that prevents people from living the life they could be living.

Now of course life experience cautions us in the presence of threat, but most people stop themselves from getting ahead or making a necessary change in their life because of a limiting belief that makes itself known through negative self talk.

In the following parts of this series of articles I’ll  share various NLP & HNLP ways of overcoming mental obstacles. In this article let’s deal with that nagging little voice in your head:

As you think about a goal that you’d like to achieve, pay attention to the auditory qualities of thoughts that try sabotage your success. Is there a negative voice in your head, or one that speaks to you predominantly through one ear or does it come from somewhere else? What does that voice sound like? Is it loud? Deep? Irritating? Demanding? Whose voice is it? Never mind what it says, just pay attention to how it sounds.

Now it’s time to make the change… I’ll give you the example of what one of my client’s achieved in her HNLP coaching session and then you can have a go at doing something similar and suitable for yourself.

My client used to have panic attacks that were triggered by a threatening voice that “spoke to her” through her left ear. I got her to pay attention to the voice and acknowledge it. Then she was to direct the voice down to her right little toe and change it to sound like Minnie Mouse. The voice could continue saying what it wanted to, but as a squeaky little sound from her little toe. She rehearsed directing the voice to its new location and sound quality in various situations where she used to have panic attacks, and found that she could no longer have a panic attack.

The idea is to first identify the location and quality of your negative internal dialog. Then acknowledge it by identifying what the positive reason is for the voice to be saying what it is saying (this is usually to protect you in some way). Next, don’t try to change what the voice is saying, just change where it’s coming from and how it sounds. Have fun with this step and rehearse it many times in all contexts where that negative voice used to influence you.

Play with this skill until you’re able to get on with what’s important to you without being effected by that old self talk any more.

PS: If you’d like to receive Jevon’s monthly Personal Development Tip and gain access to his articles, videos and audio programs…all for free, opt in here. 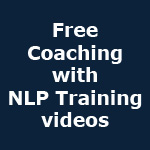 There is more to life than increasing its speed. - Gandhi