Heckle – To harass, badger, bait, provoke or needle a public speaker or performer with impertinent questions, gibes, or the like

Hecklers are also known as “mis-matchers“ in NLP & HNLP. These are the people in your audience who try to one-up you or regularly provide counter examples to your information, or try to prove you wrong.

Don’t let these people ruin your presentation! Here’s how to deal with them:

NLP is well know for effective rapport building skills, rapid state changing techniques, and ways to sharpen your sensory acuity. These are all vital skills when it comes to high caliber training and presenting.

When having to deal with hecklers in your audience, make sure that you’re in a resourceful state by assuming a resourceful posture, and analyze the situation from a multi-sensory perspective (as opposed to reacting on interpretations). You will find that NLP is a great skill set to have in such contexts. 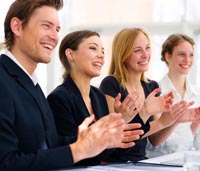 "If you will only sing on the stage of your dreams, then sing to your hearts content until you awaken to the song of angels." - Jevon Dangeli