This article outlines how the quality (aperture) of one’s awareness influences their present attitudes and aptitudes. It also points out how a particular way of shifting one’s awareness can bring about an immediate change in how one experiences themselves and their current circumstances.

One’s personal experience of reality (including one’s attitudes and aptitudes) depends largely on their present state of consciousness. Each state of consciousness offers a different view of reality, thus one’s perception of reality is only partially true, and therefore one’s state of consciousness determines one’s current model of the world (Walsh & Vaughn, 1980). This echoes the overarching idea in quantum theory that reality is observer created, or as it was stated by Anaïs Nin, we don’t see things as they are, we see things as we are (1961). Another concept in alignment with this is one of the presuppositions upon which the field of Neuro-Linguistic Programming is based, namely that each individual is the co-creator of their personal map of reality (Bandler & Grinder, 1976). Our perceptions and states are two essential cornerstones in the foundation upon which we build our world, including all our successes and failures. In order to improve the situation in the world (starting with our personal models of it), we must expand our perceptions and update our states, put simply by Mahatma Gandhi: be the change you wish to see in the world.

Albert Einstein recognised that in order to solve the problems that we experience on one level, we require expanded levels of perception. People who feel stuck in stressful situations are often unable to find a satisfying solution until they employ a means of shifting their mode of perception, or put metaphorically – opening the aperture of their awareness in order for relevant ideas or insights to arise in consciousness and reveal a satisfying solution. As stress levels increase, new sicknesses arise and the world’s problems proliferate, it’s clear that new solutions are needed. Many of the significant problems the world faces today, whether personally,- environmentally,- socially,- economically,- and others are issues that stem (at least in part) from a lack of awareness of our multidimensional interrelatedness in the vast web of life.

According to Einstein (1977), seeing ourselves as individual disconnected entities in the universe is an optical delusion of consciousness. This idea of modern humanity experiencing itself as cut off from each other and from our source of creation was described by David Bohm (1994) as a syndrome that causes individuals to see the world as disjointed mechanical fragments, one of which is themselves. With the connection to its source severed, the psyche demises to insignificance in its own perception. Unable to sense the inspiration and energy from our subtle realms of consciousness, life in the material world becomes cold, distant, alien and monotonous, devoid of meaning and purpose — and that is (in many respects) the world we see around us today. Bohm (Ibid) pointed out that humankind bears infinite potentiality, but as long as the significance of the finite controls our awareness, then we will continue to live according to this. He provides a diagnosis and prescription:

Mankind’s fallen state is a condition of amnesia, a forgetfulness of our infinite source in the conscious depths of the implicate order. The reversal of this amnesia, the psyche’s reawakening to its eternal well springs, begins with a radically new mode of perception.
(Bohm, cited in Germine, n.d)

A radically new mode of perception does not necessarily require a paradigm shift. It can begin with a change in one’s direction of attention – from – “what serves me?” – to – “what serves the world?” This requires a shift from being narrowly focussed on self fulfilment (tunnel awareness) to being more attentive toward what is current and meaningful in the world around us (peripheral awareness).

Tunnel awareness (a limited perception of oneself in relation to one’s surroundings) is a contributory cause of why we experience ourselves as separate from everyone and everything else in life, which in turn leads us to behave destructively toward ourselves, others and our environment. Tunnel awareness can be understood as a narrowed focus of attention that deletes everything in the periphery of one’s field of awareness from ones personal consciousness. The fight and flight response is associated with being in tunnel awareness, as in this state one usually identifies only the perceived danger while deleting whatever else is not necessary in our field of awareness in order to survive a life threatening situation. One may behave similarly in situations that are not threatening to one’s life, but considered by the individual to be unpleasant or disturbing, where one remains fixated on the object of negative reference while all other points of reference, including the quality of one’s own thoughts and feelings are negated (Drummond, D. n.d). Those who experience overwhelming stress or the burnout syndrome are usually stuck in a form of tunnel awareness, whereby that which perpetuates the problem is what one’s attention remains focussed on, thus the problem remains a problem.

Satisfying solutions might only be discovered when the individual succeeds in shifting their state of consciousness in a way that enables them to dis-identify from their limited self-concept. This could be facilitated through expanding the sense of self and establishing a broader perspective, which in turn may increase one’s awareness of choices beyond those that are determined through identification with the limited self-concept. Expanding one’s experience of self in a manner that includes shifting one’s state of consciousness into a calm and receptive mode not only enables one to see the bigger picture, but also to experience oneself differently in relation to one’s environment and the circumstances that are associated with it. Peripheral awareness expands one’s sense of self to include a felt connection with the environment in our immediate proximity and beyond. The process of peripheral awareness assists one to identify all sensory experiences within one’s field of awareness, as opposed to these being experienced outside or separate from oneself.

Those whom I have guided to experience the expanded state induced through the practice of peripheral awareness, often report that the boundaries between self and not self seem to dissolve, bringing about a sense that all experiences unfold within the Self (a felt sense of oneness with everything in awareness). The process ends by embodying the expanded state (feeling it in the physical form) and then choosing how to approach challenging situations from the point of view of the Self (or while the individual is experiencing a holotropic state of consciousness (Stanislav Grof’s term for “moving toward wholeness” (2000)). Depending on the individual and their reason for practicing peripheral awareness, the experience of Self fluctuates and is therefore not an ultimate state, but rather one in which the individual experiences a felt sense of expansiveness and interconnection resulting from dis-identification from a limiting self-concept. It has been reported by Rick Hanson (2011) and John Overdurf (2013) that this technique facilitates awareness of the more subtle realms of consciousness, where the boundaries between subject and object seem to dissolve and where a sense of unity and interconnectedness arises. Peripheral awareness may serve as a bridge between the ego domain and transpersonal domain, which suggests that it bears scope for revolutionary change, provided that enough individuals know about it and practice it.

The attitudes and aptitudes arising from peripheral awareness are resourceful, creative and ecological – serving our best interest as well as that of the world around us. In order to learn peripheral awareness (in it’s simple form) feel free to watch a short video of me teaching this skill at one of our Authentic Self Empowerment events HERE.

Video 28: How to Open the Aperture of Your Awareness
Talent – Discovery & Expression 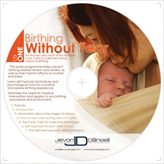 Birthing Without Fear
A comprehensive audio programme to prepare women for labour & birthing. Helps prevent birthing related tension and anxiety as well as their harmful effects on mother and baby.
...

"Heaven is living consciously & Hell is living unconsciously. Which will you choose?" - Jevon Dangeli