Resilience without mindfulness is a production robot approach – it may be effective in one area for a limited period, but sooner or later it will break down or cause damage.

Rather than perceiving mental and emotional states as fixed, the mindful approach identifies their impermanent nature and treats them as transitory phenomena (1, 2). Mindfulness elevates one’s physical, psychological and social well-being, while counteracting the effect of stressors that can lead to burnout, through enhancing one’s resilience. (3, 4).

What is missing for many sufferers of stress and burnout is resilience – the ability to maintain elasticity and buoyancy in the face of adversity. Resilience enables us to adapt adequately in challenging situations (5). Mindfulness practices are scientifically proven to develop a long-term state of resilience (6), as well as self-regulation of one’s emotions and focus of attention, whilst cultivating mental flexibility (7). Studies have shown that mindfulness is associated with resilience toward stress and burnout (8-13), while enabling people to disengage from unhealthy, automatic behavioural patterns (14, 15).

The connection between mindfulness and resilience

One’s personal experience of reality (whether mindful or mindless) depends largely on their present state of consciousness, or as it was put by Anaïs Nin, we don’t see things as they are, we see things as we are. Our perceptions and states are two essential cornerstones in the foundation upon which we build our world, including all our successes and failures.

Albert Einstein recognised that in order to solve the problems that we experience on one level, we require expanded levels of perception. People who feel stuck in stressful situations are often unable to find a satisfying solution until they employ a means of shifting their mode of perception, or put metaphorically – opening the aperture of their awareness in order for relevant ideas or insights to arise in consciousness and reveal a satisfying solution. As stress levels increase, new sicknesses arise and the world’s problems proliferate, it’s clear that new solutions are needed. Many of the significant problems the world faces today, whether personally,- environmentally,- socially,- economically,- and others are issues that stem (at least in part) from a lack of awareness of our multidimensional interrelatedness in the vast web of life.

Authentic Self Empowerment in relation to mindfulness and resilience

Mindfulness is an intrinsic aspect of the healing and transformative approach called Authentic Self Empowerment (ASE). ASE enables people to have an enhanced internal awareness of their thoughts and emotions, while simultaneously having an improved external sensory awareness. This heightened awareness brings about a calm and centred state which also enables people to gain a sense of interconnectivity with others and their environment. The ASE approach facilitates an open, receptive and grounded state of consciousness which leads to empowered, creative and resourceful responses in challenging situations. A key benefit of ASE is mindfulness based resilience.

The ASE application of mindfulness begins with a change in one’s direction of attention – from – “what serves me?” – to – “what serves the world?” This requires a shift from being narrowly focussed on self fulfilment (tunnel awareness) to being more attentive toward what is current and meaningful in the world around us (peripheral awareness).

Tunnel awareness – the cause of low resiliency

Tunnel awareness (a limited perception of oneself in relation to one’s surroundings) is a contributory cause of why we experience ourselves as separate from everyone and everything else in life, which in turn leads us to behave destructively toward ourselves, others and our environment. Tunnel awareness can be understood as a narrowed focus of attention that deletes everything in the periphery of one’s field of awareness from ones personal consciousness. The fight and flight response is associated with being in tunnel awareness, as in this state one usually identifies only the perceived danger while deleting whatever else is not necessary in our field of awareness in order to survive a life threatening situation.

One may behave similarly in situations that are not threatening to one’s life, but considered by the individual to be stressful, where one remains fixated on the object of negative reference while all other points of reference, including the quality of one’s own thoughts and feelings are negated (16). Those who experience overwhelming stress or the burnout syndrome are usually stuck in a form of tunnel awareness, whereby that which perpetuates the problem is what one’s attention remains focussed on, thus the problem remains a problem.

Expanding the self-concept to increase resiliency

A satisfying solution to a problem might only be discovered when the individual succeeds in shifting their state of consciousness in a way that enables them to dis-identify from their limited self-concept. This can be facilitated through expanding one’s sense of self and establishing a broader perspective, which in turn increases one’s awareness of choices beyond those that are determined through identification with the limited self-concept.

Those whom I have guided to experience the expanded state induced through the ASE practice of peripheral awareness, often report that the boundaries between self and not self seem to dissolve, bringing about a sense that all experiences unfold within the Self (a felt sense of oneness with everything in awareness). The process ends by embodying the expanded state (feeling it in the physical form) and then choosing how to approach challenging situations from the point of view of the Self. This technique brings about an awareness of the more subtle realms of consciousness, where the boundaries between subject and object seem to dissolve and where a sense of unity and interconnectedness arises (17, 18).

The ideas and resulting behaviours arising from ASE’s peripheral awareness technique are resourceful, creative and ecological – serving our best interest as well as that of the world around us. Peripheral awareness has been found to be an effective approach to calming the mind and body, enhancing internal awareness of the quality of one’s thoughts, emotions and intuitions, while opening one’s awareness to broader levels of perception. This is an active form of mindfulness that enables people to establish and maintain resilience.

A mindfulness based lifestyle (applying ASE approaches) is known to cultivate productive engagement in work, an expanded sense of meaning and purpose, enhanced physical and psychological well-being, and improved relationships (19). I therefore recommend the ASE applications of mindfulness for establishing and maintaining resilience.

Check out The Mindful Resilience Programme

If you would like to receive Jevon’s monthly Authentic Self Empowerment Tip, opt in here

(8) Bonanno, G. A. (2004). Loss, trauma, and human resilience: Have we underestimated the human capacity to thrive after extremely aversive events? American Psychologist, 59, 20-28. 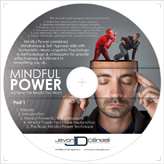 Mindful Power
This unique 6-part audio programme enables you to respond to all situations with greater awareness and resourcefulness. This is enlightened mind power with practical applications for people on the go, as well as those who want simple and sustainable ways to maximize their potential..
...

‎"The only man I know who behaves sensibly is my tailor; he takes my measurements anew each time he sees me. The rest go on with their old measurements and expect me to fit them." - George Bernard Shaw